We are going on an Adventure!!

The road to le Volcan.

“Le Volcan has been erupting all night”, our driver Patrice says nonchalantly in his strong French accent as he pulls our mini-bus into yet another hairpin bend up the narrow winding pass.  We have just started making our way up the Piton de la Fournaise volcano on the eastern side of Réunion Island in the Indian Ocean.  Our goal today, to ride our mountain bikes up the side of an active volcano to an altitude of 2,354m above sea-level.

To the almost 850,000 residents on the island, the eruption of the volcano is a pretty common occurrence.  Piton de la Fournaise, locally known as le Volcan (The Volcano), is after all one of the most active volcanoes in the world and Patrice is clearly not fazed.  I suddenly find myself struggling to breathe, but it could also just be the lack of oxygen at the 1,850m above sea-level when we start our ride.

One of many beautiful beaches to choose from on the island.

Not much is known about the history of Réunion before the French colonised this small island in the seventeenth century.  At the time the French colony was supplemented by African, Chinese and Indian labourers (originally used as slaves), which has contributed greatly to the rich cultural diversity the Island enjoys today.  French is the only official language of Réunion but English is a compulsory second language in schools. Not surprisingly, there is a great religious tolerance on the Island due to generations of different cultures calling Réunion home. 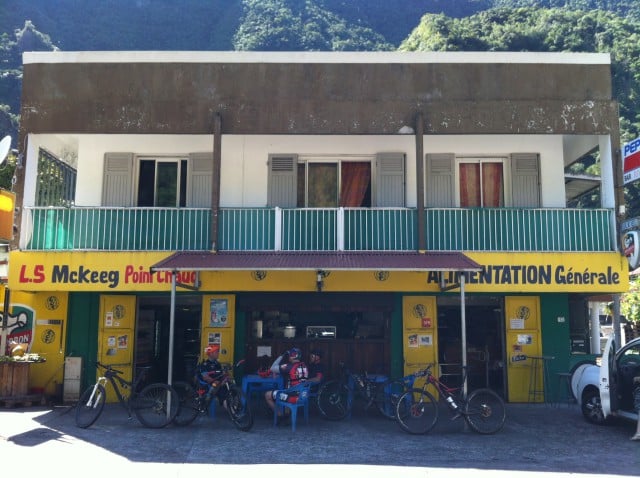 Taking a quick break on the road to Cilaos.

We’re a group of 6 adventure-seeking, mountain biking enthusiasts travelling on a trip booked with adventure travel specialist LAT Travel in South Africa.  Getting here was super easy – we hopped onto an Air Austral flight in Johannesburg, enjoying some of the best airline hospitality ever, 4 hours later touching down in the capital Saint-Denis and simply walked through Réunion customs without even needing a visa.  What a pleasure! 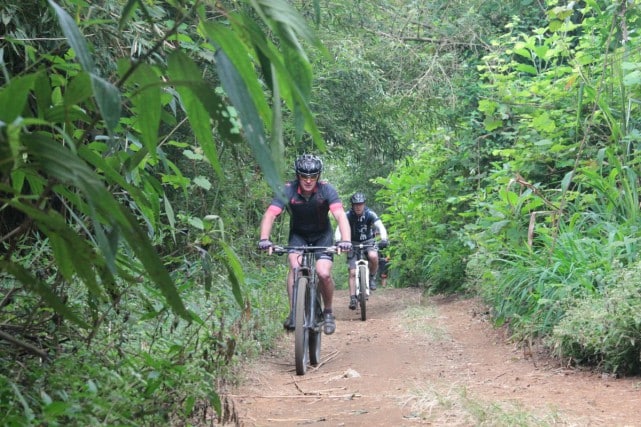 Réunion offers a huge variety of terrain to explore on your mountain bike.

Our cycle up Le Volcan starts off in a forest amongst the lush vegetation of trees and ferns, but as we we make our way up the side of the caldera this environment undergoes a radical transformation.  As we gain altitude, plants lose the battle against the harsher terrain and eventually make way to red volcanic rock and sand.

The caldera is a volcanic feature formed by the collapse of a volcano into itself, making it a large special form of volcanic crater.  In the case of Le Volcan, this crater is an 8km wide feature and an absolute wasteland of volcanic terrain.  We slowly make our way through this unfamiliar landscape, breathing becoming more laboured as we gain altitude and the smell of sulphur ever present in the air around us. 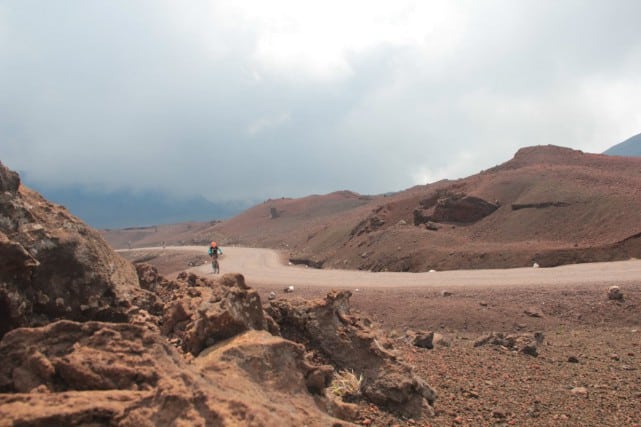 Réunion Island must be one of the most beautiful places on earth.  Between pristine coral reefs teeming with colourful fish, lush rain forests inside a dormant volcano and the reddish Martian landscape of an active le Volcan, we discover a tropical paradise filled with unexpected adventure and breathtaking natural scenery around every corner.

Beyond the jaw-dropping beauty of Réunion, the island offers equal sensational experiences in culture, cuisine and adventure. In the seaside village of St-Gilles, you might be taken aback by the super relaxed atmosphere, friendly locals or delightful mix of Chinese, Indian, French and Creole cuisine.  High up in the mountains, in the sleepy town of Cilaos, you’ll be excused for thinking you’re somewhere in the French Alps as you explore walking and cycling paths all around this dormant volcano. 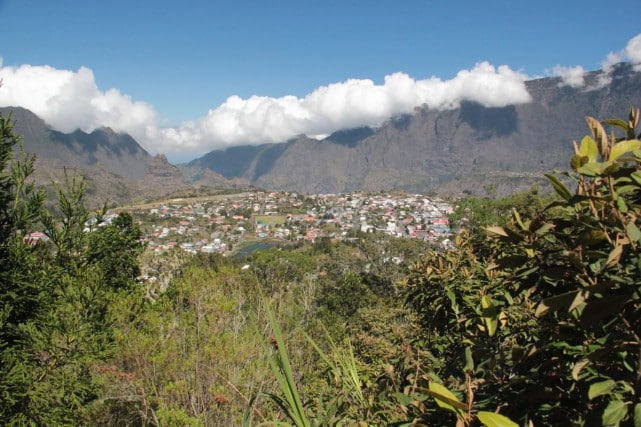 The small town of Cilaos, first inhabited by runaway slaves. The name means ‘the place one never leaves’.

Eventually after 2,5 hours of grinding it out on our mountain bikes, we reach our destination. As we summit, looking down into the gut of the caldera, we soon realise that the ‘erupting volcano’ is merely a spot on a vast 8km wide caldera and still miles away from where we are.

Once again as keen outdoor enthusiasts, we’re reminded of how insignificant we really are and totally humbled by the encounter.  Our journey up Le Volcan is definitely an experience of a lifetime and exactly why we endeavour to ride our bikes wherever we can.

This ride epitomises the contrasts this magnificent island has to offer.  One minute you might find yourself in a lush environment of a rain forest, the next you could be in the middle of a volcanic caldera totally exposed to the elements. 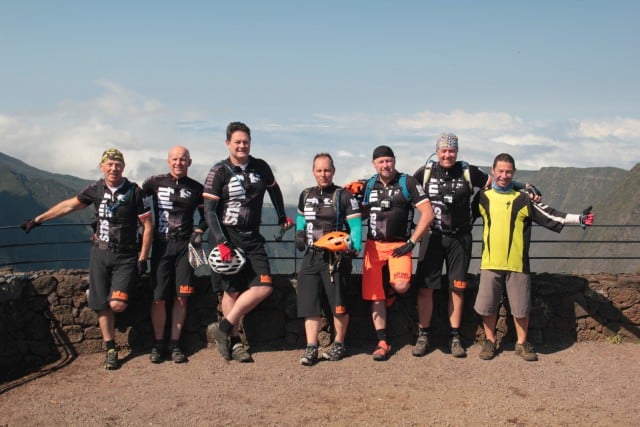 Our team of brave mountain bikers with guide ‘Ug’ (on the right).

The island makes for the perfect holiday destination for a family or group of friends, seeking an experience beyond the predictable mix of activities offered by most package destinations. 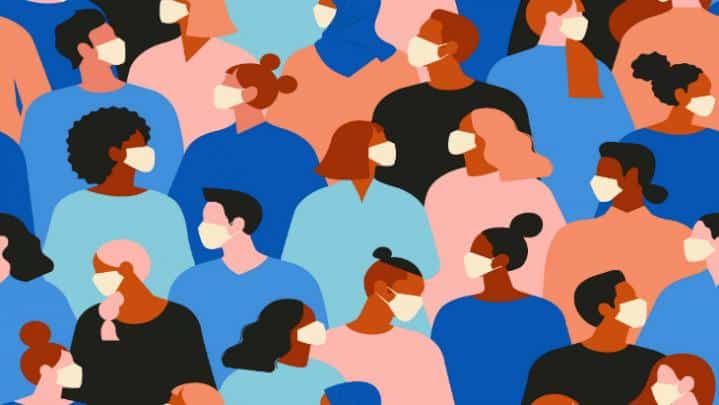 5 Ways to Repackage Tourism Services in the Covid-19 Era 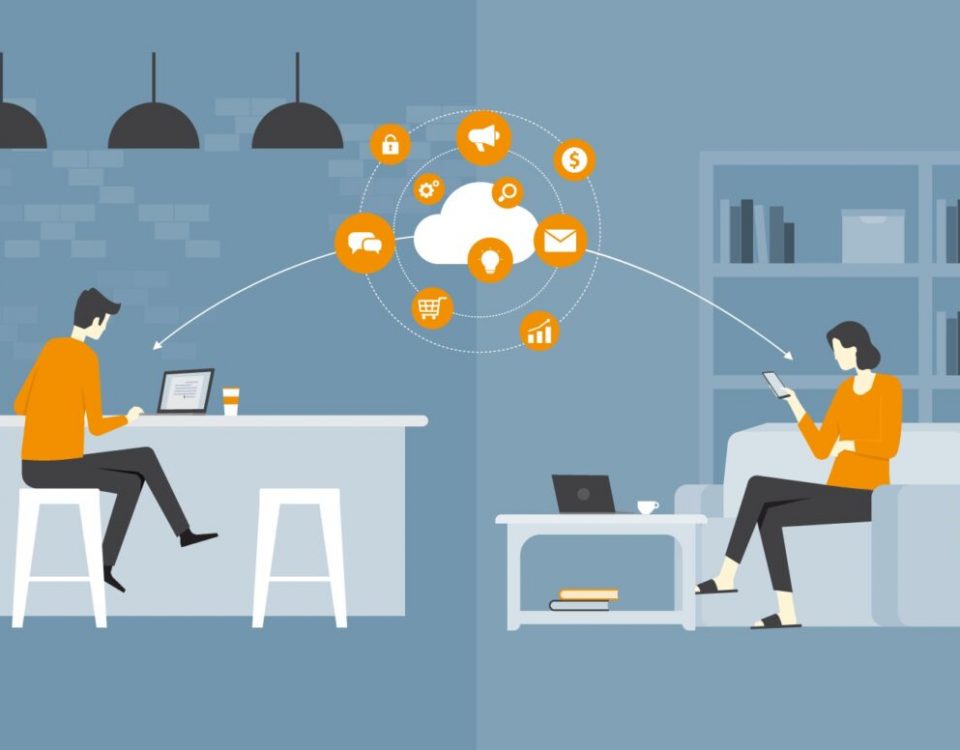 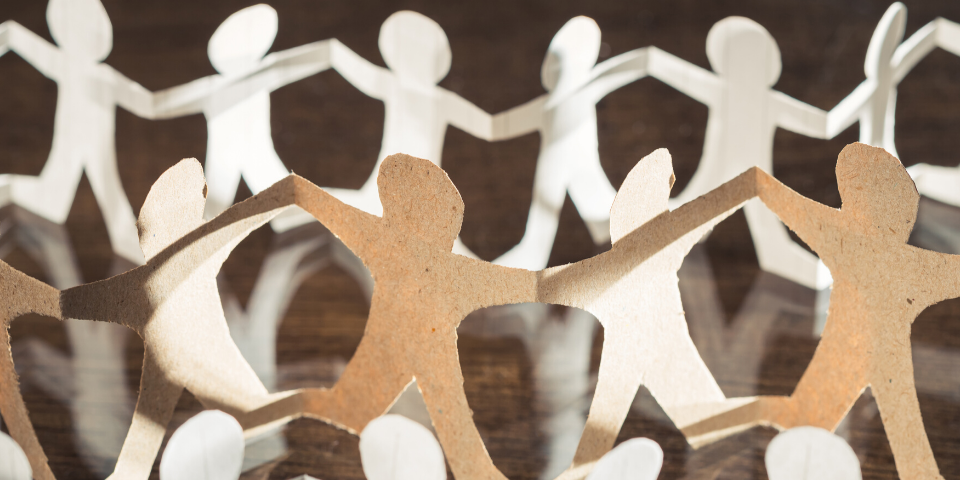 3 Steps to dealing with Social Media during Covid-19 Lockdown